Guildenstern – “I don’t believe in England” 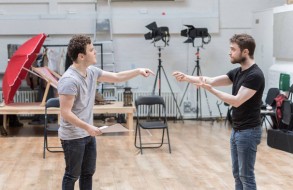 The reason Tom Stoppard’s Rosencrantz and Guildenstern Are Dead may be my favourite play is because of the deep existence-related questions it raises while making the audience laugh and renew their love for what theatre does best: turn reality on its head. In addition, its connection and reorganising of Shakespeare’s Hamlet gives me that little satisfied feeling of knowing something others may not.

The play has just opened at London’s Old Vic for its 50-year anniversary starring Daniel Radcliffe and Joshua McGuire as the two leads. In case you haven’t recognised the title’s names, Rosencrantz and Guildenstern are the two courtiers in Hamlet who we don’t see for long but who take centre stage in this play as they wait for instructions without really knowing what is going on around the court and why there seems to be so much of a to-do around the Danish prince.

The two friends, or colleagues, spend their long and boring days playing games such as heads and tails or one that involves answering a question with another one. We notice that Rosencrantz (Radcliffe) is very forgetful, drawing a blank at what happened just a minute ago. Nevertheless, he is quite curious about what it must be like to be born, or what it may be like to wake up dead in a box.

Guildenstern (McGuire) may seem more sure of himself but he is just as bewildered about his situation. The pair is witty without knowing it, and well-educated, mentioning the Greek tragedies during the play, but seem to lose their brain power as soon as they are in front of the original Shakespearian characters who completely intimidate and astound them.

This is essentially a spin-off, as it were, of the great tragedy of Hamlet, and it’s delightful to meet the players who Hamlet hires to call out his uncle’s behaviour backstage and in their “off” state. The company of cross-dressing players eagerly waiting for an audience, any audience, is hilarious and endearing. Their movement is ethereal, which adds a new level of performance to this play, following the blurriness of the Shakespearean characters and the realism of our heroes. The company is led by its director played by David Haig, a ball of passion.

The grand stage of the Old Vic may be bare but it is enlivened by a rich blue sky and white cloud horizon, as well as split by a curtain representing a map to show the journey the two characters go on toward their death. This gives space and emphasis on the actors and the text, which are enough to fill any space: McGuire is tragically funny in his lost state, while Radcliffe, in his philosophical tirades, reveals the child and need for protection in his character. We just want to hug them both and warn them – but what good would that do? They’d forget what we’d said in a minute, or they would not believe it. Indeed, the only truth they know is that of their superiors, and even they are not telling them much.

This topic of truth is definitely what stayed with me in Stoppard’s play: what we know is all assumed. We are sure about birth and death. What is in between is all interpreted through different voices and eyes – or shadows, as is alluded to at the very end of the play with shadows resembling Plato’s cave. We choose to believe, we assume things to be true, because doing anything else would never have an end. And we don’t have time, do we?

This feeling of endlessness is brought out in Stoppard’s text through many repetitions and inconsistent reactions to questions (“Is he there?” – “When?”) that highlight how fragile communication and meaning can actually be in our lives. Guildenstern thinks he knows what it is to die, or at least he thinks he knows what it’s not like to die, condemning the actors’ constant pretending. But later, when the theatre director pretends to die, Guildenstern believes it really happened!

I wish I could give you multiple brilliant examples from the text, but I don’t have it in front of me. What I love about it is that it faces us with the reminder that we don’t know much at all, and certainly not about ourselves.