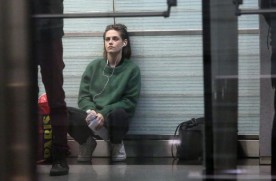 If you know me, you’ll know that I usually steer clear of horror films: I am the worst scaredy-cat. In fact, at risk of sounding self-promotional, I prefer just acting in them! The same usually goes for ghost stories, although, as I was reminded yesterday, once the ghost appears, the initial anticipation makes space for a new kind of fear which is less intense but can linger for longer: the fear of ourselves.

This being said, Kristen Stewart’s second collaboration with French director Olivier Assayas, Personal Shopper, “Mise en scène” winner at Cannes in 2016, was something I could not miss. The collaboration between these two can even be called harmony, as was also the case with Clouds of Sils Maria a few years ago, which also included Juliette Binoche. The combination of the two actresses that so much seems to oppose and their diverging levels of apparent confidence and elegance was perfect: each performance highlighted the other’s cinematic strength.

This happens when a director truly gives space to actors. It is said that Binoche knew her text inside out (she did have to act in a foreign language), while Stewart hardly learned her lines but read them on the very mornings of shooting her scenes and went with what they gave her in those moments. I remember that opening scene on a train going into the Swiss mountains, when Stewart stumbles over her line “I’m her personal assistant”, just laughs at herself and keeps going. I like to believe that Assayas wanted to capture this immediate quality, this raw acceptance of the actress’s awkwardness on that particular day.

In Personal Shopper, the actual subject of this article, the same happens. When Stewart’s organic reactions are captured, that’s when cinematic magic happens.

The story takes place over a few days in Paris and its surrounding suburbs. Stewart plays the American Maureen, a personal shopper to Kieran, a self-absorbed celebrity. After losing her twin brother to a heart attack, she insists on staying in the city of lights to receive a sign from him. She even spends nights looking for his spirit in the old house he was living in before he died. As she looks for the ghost, a spirit appears to her, but it is not the one she was looking for. Over the next days, she starts receiving strange text messages that force her to face her fears, another death, and herself.

Maureen’s psychological state of being stuck in a crowded city and working for a woman she despises is reflected in the shots by cinematographer Yorick Le Saux. Maureen lives in a busy area near Porte St Martin and rides around town on her scooter. She is indifferent to the city, just working to pay her rent. There are no beautiful shots of Paris, but instead we are stuck in traffic, high on caffeine. Even when she is alone, Maureen is glued to her phone or computer – a state that we can all relate to and that contributes to her restlessness. She is constantly either running a new errand (do personal shoppers really ride around with Cartier jewellery on scooters?), even traveling to London and back with the Eurostar in the same afternoon, or keeping herself awake on purpose at night. While the exterior shots reflect anxiousness, the interior shots are beautifully detailed in softer light and set design by François-Renaud Labarthe.

The costume design by Jürgen Doering plays a significant role in this film. While Maureen usually walks around with shapeless jeans and bland jumpers, her supposed virtual stalker encourages her to try on her client’s luxurious dresses. Stewart, who we often see wearing Chanel in photoshoots and red carpets in real life, blossoms from careless tomboy into a model-like presence when wearing the stylish clothes, transporting her into another version of herself.

Maureen is usually alone when reaching new states of consciousness about her brother or herself, which could bring up the idea that the texts she is receiving are just her imagination. After all, her search for her brother is her way of holding onto him, and perhaps she feels safer thinking he is pushing her towards her limits.

Again, what I love about Stewart and Assayas is that it is so clear how free she is. This is a woman who needs her space to get to certain places on screen, and Assayas embraces this, doing himself and his audience a huge service. Stewart gives one of her best performances here as a nervous chain-smoking heart-broken young woman who is lost in the world, wherever she goes. Her ability to do her job well is a small escape from herself, but distractions keep coming in, from questions by Kieran’s boyfriend as to what she is really waiting for in Paris to her text messages. Stewart is an instinctive actress who lets her daily emotions be palpable. Needless to say, I am fan of her strength and willingness to show all of herself.

Did that sound like an ode to Kristen Stewart? Well, it is!

Personal Shopper is a beautifully directed horror film that lingers and invites the audience to ask themselves where their ghosts come from and to let them in.

One response to “Personal Shopper – Review”