One could draw a parallel between Tarantino’s Once Upon a Time… in Hollywood and Benedict Andrews’ Seberg. The film, which is mostly set in Los Angeles (as well as New York and Paris), begins in 1969 and shows a three-year period of time when Jean Seberg, a sweet-looking blonde movie star who became very famous in France and was married to the celebrated author Romain Gary, was the victim of extensive FBI surveillance due to her support of the Black Panther movement. 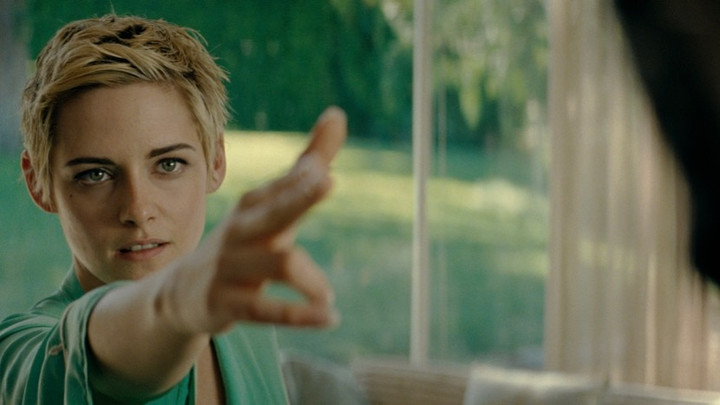 Indeed, the FBI files, known to J. Edgar Hoover and even Nixon, reveal that it was their intention to “neutralise” Seberg, to make her lose credibility in order to weaken the movement. As Anthony Mackie’s character Hakim Jamal tells her, she’s not the victim, but has been caught in the crossfire.

This echoes the beginning of the film, which shows Seberg playing Joan of Arc burned at the stake. An accident on the actual film set in 1957 left her with scars: Hollywood and the world took from her physically, but also mentally: as she notices that she’s being watched, she grows more and more paranoid and alcohol and pills become more and more attractive.

The film presents a strong ensemble, from Vince Vaughn and Jack O’Connell as the FBI agents dealing with morals, work stress and toxic masculinity, to Margaret Qualley (also in Tarantino’s film), Stephen Root as Jean’s agent, and Zazie Beets as Jamal’s betrayed wife.

As for Kristen Stewart, I feel that she shows a new dimension of herself in every film she does. Her voice here is articulate and slightly higher than in other roles and I enjoyed her references to Godard’s Breathless (1960): at one point, Stewart touches her face in a playful way, just as Seberg did with Belmondo, but later covers her mouth to highlight how her voice has been taken away from her. There is no false note, and it’s exciting to see Stewart light up the screen.

What Seberg had to go through is incredibly sad and 40 years after her death, this is a film that honours her strength, talent and intelligence. However, nothing will right the wrongs that were done to her and isolated her so.