Lingua Franca: a language that is adopted as a common language between speakers whose native languages are different.

Back at university, I attended a module called “English as a lingua franca”. We talked about how English is being spoken all over the world in life and in business, and the idealism of the Tower of Babel bringing people together. You’ve got those who speak English very fast but with mistakes, and those who speak it natively but don’t understand their own grammar. 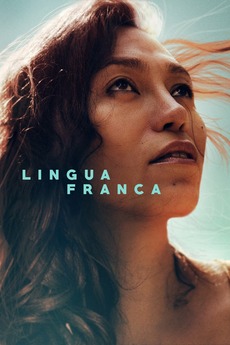 In the film Lingua Franca, one thing that stayed with me are the reassuring lies that we tell other and ourselves. Alex (Eamon Farren) wants to stop drinking and make his family proud by helping out his uncle in his slaughterhouse, but falls back into excess and uses his native English language to make grand promises to Olivia (Isabel Sandoval) that he can’t honour. On the other hand, Olivia, an undocumented immigrant from the Philippines, has created a routine for herself as the helper of an elderly woman living near Coney Island and there is weight to every word she says – the slow way she explains to Alex how to take care of his grandmother, and the hope in her voice every time she talks to her mother on the phone, explaining the technicalities of finding an American to marry her.

It sounds like I am slamming the character of Alex, while he is a complex 30-something man who is struggling like so many others are. His struggle is just as valid as the unimaginable one of an immigrant waiting for a call but constantly fearing she will be sent away. This is also a story about two people connecting and helping each other, even a little, to find meaning in their lives. Written, directed, acted and edited by Sandoval (wow! This is her third feature, and she is the first transwoman of colour to direct and headline a film competing at Venice), I am truly glad this film was made. Don’t worry about the visuals of the slaughterhouse, the dialogue suffices to warn that if a large animal falls on you, you’re dead.

Speaking of dead animals, we see a few of those in Rose Plays Julie as well. Rose is a veterinary student and is currently learning to euthanise animals. I had to compare the gentle care with which the animals are handled to avoid their suffering with the sometimes horrific care we give humans.

“Who are you?” Peter’s wife asks him on a post it. This is something Rose (Ann Skelly) is asking herself too: her adoptive mother just died, and she’s trying to reconnect with her biological one.

The directors Joe Lawlor and Christine Molloy present us with a film that feels slow due to the long shots of faces that could surprise us at any time. The visuals are stunning, with the coast, the clinic’s very icy rooms, as well as the hypnotising intensity of stares. But these are not just stares: Rose has just learned that her biological father raped her mother, and that this act is where she comes from. How can she move forward from this? How can she approach her father and protect herself from his bestial character? Aidan Gillen plays the man who seems friendly but can’t understand what “no” means, Orla Brady as Ellen is naturally warm but is haunted by what has happened to her and Ann Skelly is determined, incredibly brave and clinical as Rose.

This is a thrilling film thanks also to its soundtrack, but one you may also need time to digest. I’m glad it asks the question how a man moves forward after learning he is despicable.